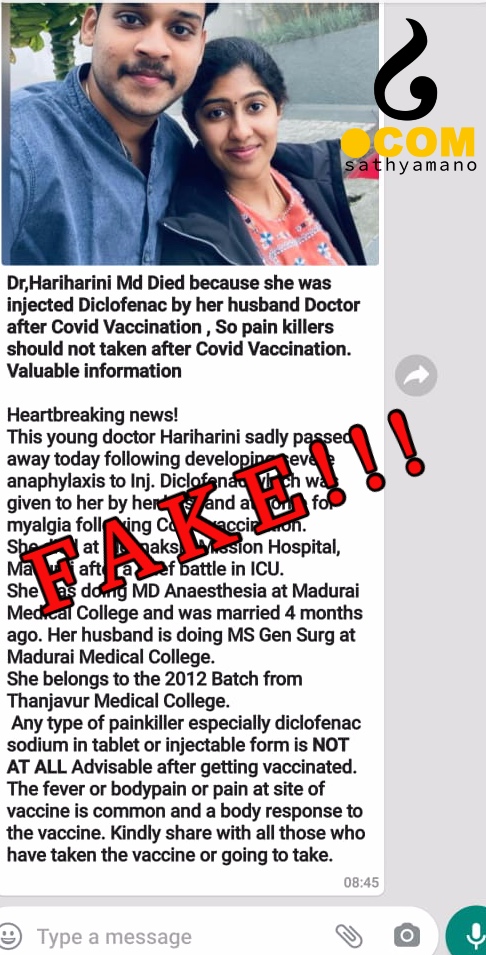 Social media is not out of the Covid frenzy yet. A Madurai doctor died on March 11 after being in the hospital for few days. Incidentally, she had received the cover vaccine around a month back and some were quick to relate the two incidents. Messages similar to above are doing the rounds claiming the vaccines are unsafe along with pain killers or injections

This is FAKE. Doctors have denied this and said that the case is not linked to cover vaccine.

Hariharini received her first dose of Covid-19 vaccine on February 5th. As per police sources “Hariharini developed fever and body pain on March 5th. Her husband administered the pain killer injection Diclofenac while at their residence. A few hours later, started vomiting and was unconscious”.

“She was brought to Meenakshi Mission Hospital on March 5th and was kept on ventilator support for 4 to 5 days” explains Dr. Kannan. The autopsy was performed the next day, on March 12th and as per diagnosis, she had a condition of hypoxic ischemic encephalopathy (brain dysfunction due to inadequate oxygen supply) due to anaphylactic shock (severe allergic reaction). Doctors have ruled out that this could be related to the vaccination she had received. They also mentioned allergic reactions to vaccination could not happen after such a long period.

The vaccinations are safe and there is no need of a worry.