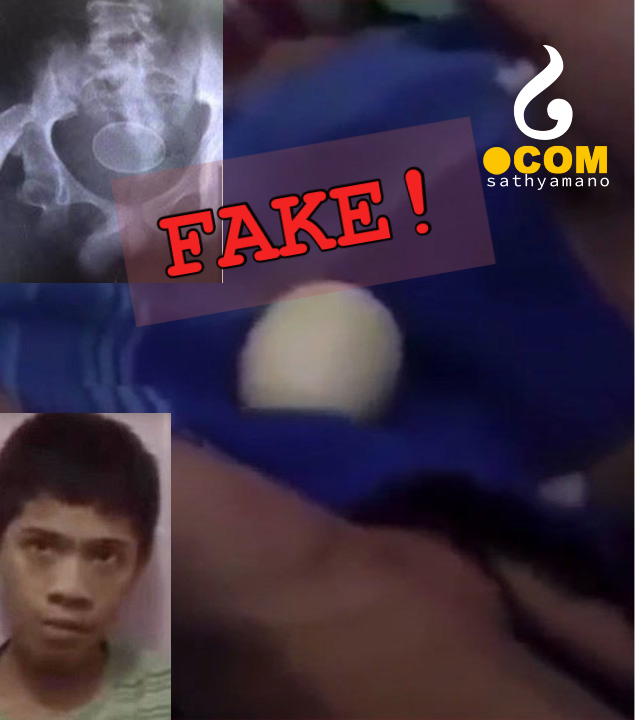 A video and story from 2018 has got our attention. It’s the story of an Indonesian boy laying eggs. The child’s family claims that the boy has laid 20 eggs in the last 2 years including the 2 on that day. The video that is being shared shows the boy being taken to hospital with severe stomach pain and lays an egg on the hospital bed. Since then the miracle story has been taken up by many international media without giving details into the later investigation.

The events happened but the story is FAKE.

The boy’s name is Akmal and the bizarre event happened at Gowa, Indonesia. The doctors where surprised to see the boy laying egg, but upon investigation they found it was just a chicken egg. Medics have said it is almost impossible for poultry eggs to develop inside a human and they suspect the eggs were put inside the youngster. X-rays showed the egg in the boy’s rectum.

Muhammad Taslim, a spokesman for the hospital, said: "Our suspicion is that the eggs were deliberately shoved into Akmal’s rectum(express.co.uk). His father denied that the eggs were swallowed or inserted into his son’s body. He claims it to be “supernatural”.

Doctors have diagnosed him with “corpus alienum”, which is a medical term for the presence of foreign objects in one’s body, thus eliminating the possibility that Akmal himself somehow magically produced the eggs in his body. Gowa Police have sent a team from the Child Protection Unit (PPA) to investigate the case as they suspect child abuse, if someone has forcefully inserted the eggs into Akmal’s body.

Akmal is the same boy who made news in 2015, claiming he had laid 7 eggs in a week. Doctors were surprised at finding chicken eggs in human rectum back then also.

Apparently, Akmal is not the first Indonesian to have come up with the ability to lay eggs. In June 2014, a 29-year-old woman named Sandra Rauf from North Sulawesi was reported to have “given birth” to five eggs. Police found out that she was working as a mystical healer and she had inserted eggs into her vagina to gain publicity for her “profession”. In November, 2014, 62 year old Engkong Naim made the claim that he had been laying eggs since 1988. This was just a scam to collect money from people who were interested to see the egg collection that he said to have laid(indonesiaexpat)