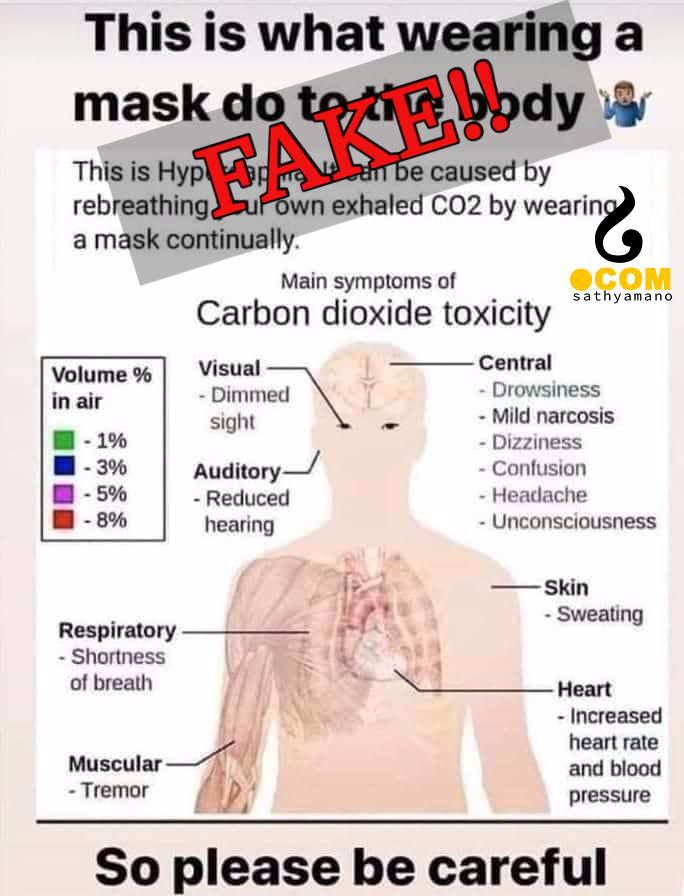 There is a picture circulating with a caption saying wearing a mask can cause hypercapnia due to breathing back the carbon- dioxide that you are exhaling. The picture also lists the symptoms of carbon- dioxide toxicity and links it to wearing masks. Several other posts are surfacing, with the same message and other pictures.

Hypercapnia or hypercarbia is a condition of abnormally elevated carbon dioxide in the blood. CO2 can accumulate in many cases that cause hypoventilation. CO2 is a sub product of the the metabolism of our body and lungs push it out as part of our respiration. When our lung is not able to function properly, it is not able to push out as much. CO2 as it generates. This can happen due to any illness or medical condition.

It is true that Hypercapnia can also occur if you are breathing air containing abnormally high concentration of CO2, like volcanic activity. It can also be caused due to rebreathing exhaled CO2.

But, wearing masks is not in any way linked to hypercapnia. Masks are breathable material and do not block air passage in any way. Some discomfort to a person newly using a mask can occur, but it is in no way blocking respiration. The oxygen level remains sufficient in the air that is entering our body while wearing a mask.

Also, we have to understand that even before this, several nurses and people working in contaminated environments have been wearing mask regularly for hours, daily. There are no cases of mentioned effect reported.

The picture above has been edited to include the caption relating hypercapnia to wearing masks. The original picture says only about the symptoms of carbon dioxide toxicity and is taken straight out of wikipedia.

While using a face mask for more than a few hours as per guidelines can cause other health issues, hypercapnia is not one of them.