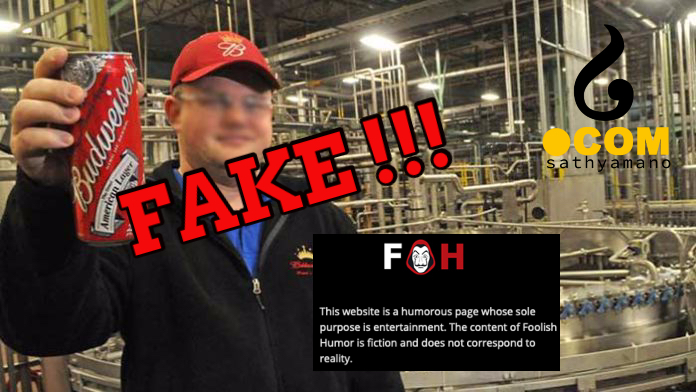 A news with above title has raised a lot of questions among readers on the Budweiser drink’s safety concerns worldwide. An employee of Budweiser brewery claims to have been peeing in their beer tank for past 12 years. Before jumping into conclusions, the bigger question is- Is this news true?

We investigated on several online publications that had this article and we traced it back to the Foolish Humor website that seems to have published this first. The site is purely for entertainment and does not publish facts or true stories.

Below is the description of the site at the bottom of the page.

“This website is a humorous page whose sole purpose is entertainment. The content of Foolish Humor is fiction and does not correspond to reality."

Below is the link and the original article taken from their site.

“Budweiser employee Walter Powell (alias used to keep his anonymity ) has acknowledged through a statement he has been pissing inside Budweiser beer tanks for 12 years. At 34 years old, Walter has wanted to clear up any doubt about the taste of Budweiser and has stated he’s been doing this for more than a decade just before bottling.

Walter also explained he has only worked in Budweiser Brewery Experience (Fort Collins, CO) so the rest of Budweiser made in other cities are free of piss. “Is like a Russian Roulette, sometimes when I am with my friends and they ask for Budweiser, I blush and say to myself, poor guys”.

However, we have to know the 75% of Budweiser beer is made in Budweiser Brewery Experience so surely many of us have drunk Walter’s piss. “First time I made water inside the tanks was after working 2 years, once I moved up and earned the trust of my superiors”.

Walter also said he doesn’t know why he did this “I was thinking about nothing, just the WC was too far away and I was lazy to go. I won’t do it again, from now on you all can feel the authentic Budweiser taste”.

Even though we must know he keeps working in the company everyday and can’t be detected among a 750 workers staff.”