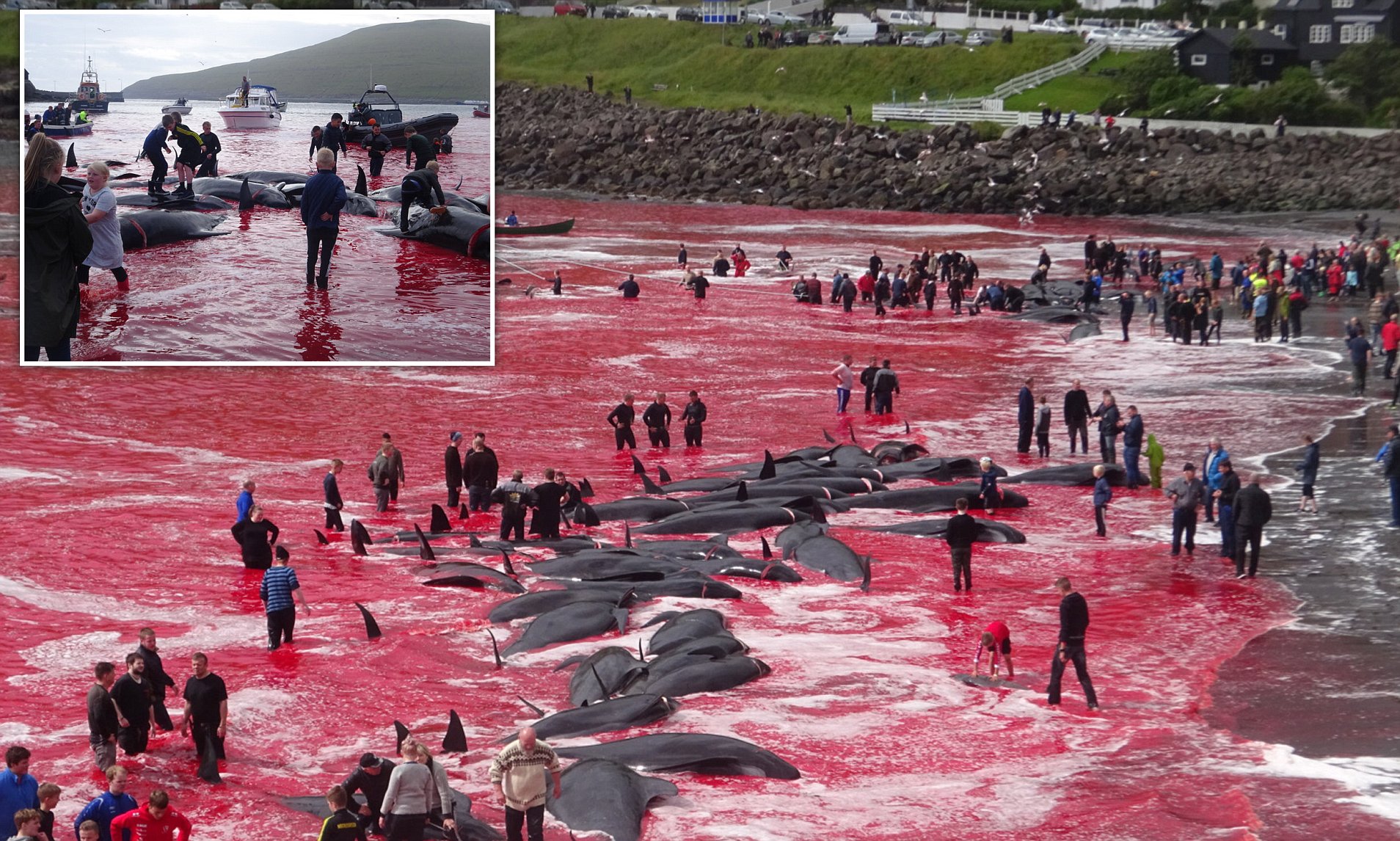 Many of you might have seen the bloody image above showing the barbaric life of the Faroese and stories of how they hunt and kill whales and dolphins for fun. Whoever sees this cannot go without criticizing this inhuman act. Well, how much of what you heard is the truth? Let us take a deeper dive into the life of the Faroese.

The Faroe Islands is a North Atlantic archipelago which is an autonomous territory within the Kingdom of Denmark, with a population of just about 52000. The Faroese rely heavily on the sea for food. Annually, around 800 pilot whales and a few white- sided dolphins are slaughtered on the shores of the islands, mostly during summer. The activity is called ‘The Grind’, during which the pod of whales are brought to the shores by boats circling around them, not allowing them to escape. Once they reach near the shore, those who are waiting on the land move in to the water,  latch hooks on to the whale’s blowholes and haul them to the shore.  Once on land, they are killed by cutting off the spinal cord connection to the brain. Whales die within a few seconds to a few minutes bleeding on the shore. The sight is surely not for the light hearted. The shores and waters turn red. The whale meat and blubber are then split among residents for year long consumption.

The Grind has faced heavy backlash from people all over the world for being cruel and barbaric. Activists are calling the activity unnecessary and they are fighting for the total ban of this Faroe tradition.

The Faroese, have a whole different story to tell. The tradition of Grind goes back more than a 1000 years and the whole civilization has grown up with this. The Faroe Islands are a group of rocky islands. There are no forests or wild animals. Due to the rocky terrain, there is no major cultivation of crops. During the winter the only food they have are salted meat or dried food. The people survive on what the ocean brings them. Each pilot whale provides the community with several hundred kilos of meat and blubber. Without the whales as food, the Faroese would have to pay heavily to import meat from outside. There is no fixed hunting season for the Grind. These whale catches constitute around 0.1% of the whale population and is fully sustainable.

Animal welfare activist claim that these whale killings are unregulated and that the animals are suffering. Even though Faroe Islands are part of Denmark, they are an autonomous body which is not part of the European Union. So the laws that regulate whale killings in Denmark are not applicable here. There are several regulations that has been placed in recent times by the Faroe authorities. Use of spears or harpoons are prohibited. They are only to use hooks on blowholes to pull the whale in. Only a person with special training on whale slaughter by using the spinal-cord lance are allowed to kill whales. This weapon is specially designed to cut the spinal cord so that whales die within seconds.

Unlike many claim no portion of the whale meat is sold. Its uncommercial and are organized by small communities. These are divided between the people and those who take part in the Grind. The meat is not paid for and each family takes it to be stored for the coming year(wikipedia)

The ocean pollution has been a much harder enemy for this Faroe tradition. The high level of mercury, DDT and other harmful chemicals have made the whale meat not fit for human consumption. The authorities recommend only one whale meat and blubber dinner in a  month, with special recommendations for pregnant women and children.

There are several online petitions against this Faroe tradition of whale killing, with several 100 thousand supporters. And the Faroese who number only 52000 are out numbered in these petitions. For Faroes the whale killing just a way of life and part of food habit, just that the slaughter is on open shores instead of a closed slaughter house and the blood flows on the shore than going down the drain.

The below documentary is a must watch to understand both the sides of Faroese and the animal lovers.